Do they know it’s Christmas time at all?

I consider myself lucky this year to have managed to escape one part of a Western Christmas which by this time would be grating on my nerves: Christmas songs!  Don’t get me wrong, I don’t hate all of them and when they first play there is usually a twinge of excitement in my heart because Christmas is around the corner.  But by this time (when the songs have been playing since the beginning of November), I find most of  them to be annoying.

I’ve realised over the years that a lot of people don’t really listen to the words of songs.  They catch the tune or the rhythm and hum or tap along to a song that they like but they don’t really listen to or know most of the words.  On the other hand, I’m a listener when it comes to songs and seem to have an accidental library of songs stored in my head that pop out when someone strikes a tune.  If only I had a tuneful voice to go with this hidden talent!  This is a great ‘gift’ when it’s a song I like but it can also be annoying when I really don’t like the words of a song which everyone seems to love the tune or rhythm of!  Unfortunately I didn’t leave Wales early enough to avoid one particular Christmas song which has been irritating me for a while now.  You’ve probably already guessed it from the title:  Do they know it’s Christmas time at all by Band Aid (1984).
https://www.youtube.com/embed/bjQzJAKxTrE?wmode=opaqueThe first time this song bothered me was when I first moved to Kenya and the mum of my host family said how grateful she was for the warm climate here.  She had previously visited the UK and had noted how the houses were much better insulated, the windows were double glazed and everyone she visited had heating in their home.  Most Kenyan homes are not like this and she said God had protected Kenya from cold weather because, quite frankly, thousands if not millions would die.  So the next time I heard the line ‘And there won’t be snow in Africa this Christmas time’, I thought, ‘yes, thank the Lord for that’.

But as I’ve involuntarily listened to the song more over the years when it’s played in shops or at Christmasy events, the lyrics have come to bother me more and more:

But say a prayer, Pray for the other ones
At Christmas time it’s hard, but when you’re having fun

Where the only water flowing
Is the bitter sting of tears

Well tonight thank God it’s them instead of you

Where nothing ever grows
No rain nor rivers flow

Do they know it’s Christmas time at all?

I’m going to stop there and move on…  The Africa in this song is not the Africa I know.  The Africa I know is a fruitful place with beautiful landscapes, millions of smiling faces and faith that runs deep and wide.  In Africa I’ve learnt about endurance, grown in faith and met so many incredible, inspiring people.

I know a lot of people in the West are concerned that this Christmas won’t be the same as usual, and truth be told, it probably won’t be.  Here in Kenya most people don’t have decorations up and haven’t bought special Christmas food yet.  Christmas here is a lot more low key.  But do you know what Christmas here is about?  It’s about celebrating the God of the universe who came into our world in the form of a fragile little baby so that he could live a perfect life and later on become the Saviour of all humanity.  It seems to me that irregardless of gifts, parties and decadent food, that here in Kenya, people do know it’s Christmas time & they know what Christmas is really about.  A truth that so many of us, even Christians, in the West have forgotten.

I love the gifts and the food and the different things we do in my family that have become tradition; but, honestly, it has glossed over the reality of why I celebrate Christmas.  I have no idea what to expect this year as I celebrate Christmas with Lox’s mum in a village.  I know we won’t be having roast turkey or Christmas crackers but maybe with Christmas stripped of all it’s trimmings this year, I might just have the clarity of mind to keep the main thing as the main thing.

So no, there won’t be snow in Africa this Christmas time but the greatest gift I’ve been given this year really is life, not just for this year, but for eternity.  And all because a baby was born in a manger over 2,000 years ago.

Kilifi during the Covid-19 pandemic

Written by Lox:For the past couple of months the world has had a big pandemic surprise, COVID-1 ..

What will you harvest?

In Kenya, and especially in rural areas, I always enjoyed how most people would grow crops no m ..

What will you harvest? 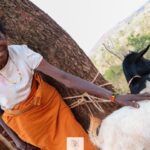